Before I begin this post, I just want to apologize for a lack of content the last few weeks. As you may know we have been having some pretty terrible storms here in the UK recently and that's been keeping me distracted with other things.

My family and I are all fine. The weather thankfully has not really effected us to badly other than the wind doing a good job attacking our garage and knocking everything off the shelves.

For those in Cornwall and the rest of the west country that have been effected badly, I hope you are okay and that your family are well. I cannot begin to imagine the stress and devastation this terrible weather has brought to your lives and I hope that you are able to get back home and back to normality quickly and without to much further stress.

So today I want to talk to you all about Child abuse. While I was doing some research today for my current WIP (work in progress) I was brought to tears by some of the statistics that I read on the NSPCC website.

I'm going to share them with you here, but you can also view them by clicking the link on the line above.


The above was copied directly from their website. First of all, I want to look at the last line. On average every week in the UK at least one child is killed at the hands of another person.

One child almost every week. I don't know about you, but I had no idea. Why don't these children make it into the papers? Why aren't people yelling and screaming on their behalf? What? Are they not young enough? Cute enough? Were they trouble makers? Who knows, but how can we just ignore something like that?

Now if you don't know what Childline is you should. Childline is an organization here in the UK designed to help children who are struggling to have someone they can call for free, for advice, support, or just someone to listen.

Childline was a massive support to me when I was a child and suffering abuse. When things got unbearable at home, it was Childline I called but like me, the majority of children who call Childline, probably withhold personal information because they are afraid of what might happen.

Imagine what those counsellors go through on a daily basis. Imagine having a child on the end of the phone, scared, injured, and in desperate need of help and being able to do nothing more than talk to them. It must be heartbreaking work and yet there are people out there doing that everyday. Amazing people who just for a short time, give a child reassurance because that's what they did for me. When no one would listen, when I felt completely alone and abandoned. A counsellor at Childline would give me reassurance that at least someone was on my side, that someone was willing to listen and not only listen but believe what I was going through.

I was beaten up on a regular basis by my mothers partner, while my mother turned a blind eye to it. When I tried to tell her, I was accused of being a liar, even when she walked in and saw him throw me across the room with her own eyes, she refused to believe me, when I said that it was not the first time.

years later when that same man, punched me in the face in front of her and tried to strangle me unprovoked, she still refused to acknowledge the fact that it had been happening for years and I believed her. I believed she had no idea what that man was doing to me.

Until recently, for the first time in a long time my mother admitted the truth, came right out and said "I knew he was abusing you." You wanna know the best part. Despite saying she knew several times, despite telling me that she didn't know how I could still talk to her after all that she had allowed to happen to me. Despite all of that my mother turned around after a few weeks and started to deny it all again.

All my life I had waited and longed for my mum to just say sorry and then she did only to take it all back again.

Well there are children out there now, going through what I went through and worse. Children living everyday in fear and yet for the most part it just gets swept under the rug.

People don't want to deal with the reality of what is happening out there on a daily basis to children.

That on average one child dies in the UK every week.

Don't tell me that no one knows, that no one see's the signs because I lived that life of abuse, people do see, neighbours, family friends, other family members, teachers even. People see but they say nothing.

Here's a question for you, would it even do any good to say something? 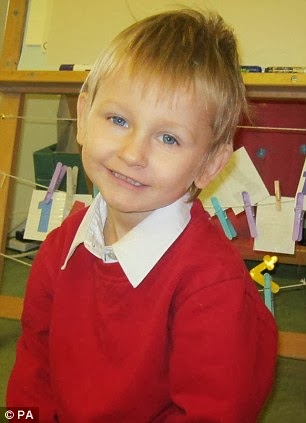 Look at this Beautiful little boy. Just 4 years old and he was tortured and eventually beaten to death by his own mother and I believe one of her partners.

Teachers, doctors, police and social workers all were aware of this child and yet he was left there to suffer alone and eventually, to lose his life. This little boy looks very similar to my son, to hundreds of other little boys out there and he did nothing to deserve the life he was given and yet those who could of and should have helped him, did nothing.  You can read more about this poor boy here

But Daniel is not alone.

Jack Harrison, just a baby. Was admitted to hospital showing serious signs of neglect, then released with no plan for his future care. When he died he had fractures to his arms, legs and ribs. What kind of monster could do that to a baby?

I could go on listing children like this all day, but instead I'm going to send you to another website where there is an extensive and heartbreaking list of beautiful little children, who have lost their lives, when they could have been saved.

Then what happens if the child is taken into care, do they get a happy ever after. Sometimes perhaps but not always, abuse within the poorly named care system is know to happen and on a regular basis.

The NSPCC statistics go on to say that:

Now of course not all of them will be due to abuse, but some are and even so there is something seriously wrong within the care system if the children are running from it. So what? lack of supervision, lack of support, maybe even just a desperate longing for home, because despite what my mum let me go though as a child, I still loved her, I still do despite it all.

Even in the knowledge that my abuser is still such a good friend of hers that she allows him to dog set for her.

Child abuse is one of the worst things that can happen to a person, something needs to be done to stop it and stop it now. Abusers and people who allow their children to be abused need to be outed because right now it is far to easy for people to get away with it.