So today is the first day of the A to Z challenge. My theme started as dog breeds but kind of developed into a dog fest of mixed breeds and feature dogs who were matched to the days letter by their name, we've even got some Charities and rescue doggies, who are looking for homes too. How great is that?

As a result of this I have to say a big thank you to all the friends and a few friends of friends who offered up there lovely doggies for this challenge, as well as the rescues that have been so helpful. The result of which is a month long awww fest :)

So we're starting off the Awwww factor, with a dog that is so cute you can't help but want to hug him.

Prepare to melt as I let Karen Amanda Hooper introduce you to her beautiful American Bulldog x Shar Pei, Squishy. 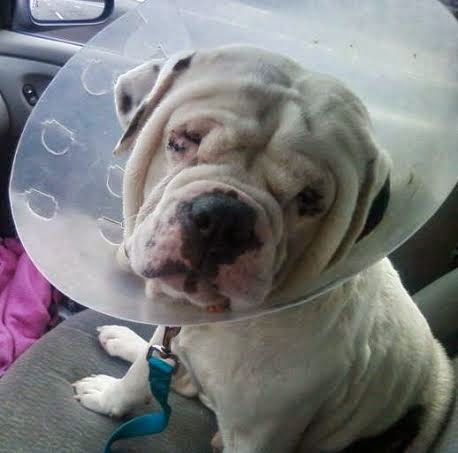 Squish (aka Squishy Von Valentine) was adopted from American Bulldog Rescue on Valentines Day 2014.
I've had two other American bulldogs (my gentle giants, Rooney and Baloo--RIP sweet boys) who were between 90-120 lbs, but Squish is a miniature AB. He's fully grown at 55 lbs, so we think he might be ABR with a mix of Shar-pei (look at that squishy face!) Or, and I mean this in the nicest way, he might be the runt of a litter. But a super cute runt!

I first saw his photo on the ABR Facebook page and I instantly fell in love. He had the cone of shame on his head and he had just been picked up from the animal shelter. He had a severe eye infection and ulcers on his corneas due to neglect. Someone tied him to a pole outside of the shelter and the staff found him hiding in the bushes when they opened in the morning.

They knew next to nothing about him. Being the risk taker that I am, I didn't care. I applied for him before he was even officially listed for adoption. 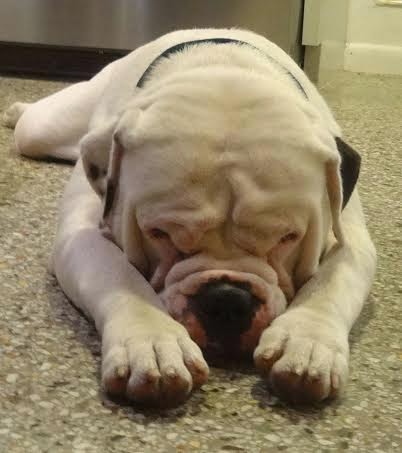 We've only been together for over a month, and we've had LOTS of training to do, and sadly, some health issues to battle. Even though the shelter did surgery on his eyes and helped his condition temporarily, Squish needs another eye surgery to fix the issues that are still irritating his eyes, so he'll be wearing his cone collar again very soon (and he's not too excited about it).
American Bulldogs are such a loving and fun breed. Yes, they can be bullies (it's in their nature) but with a little bit of training and a lot of love, they can be obedient, loyal, and fun-loving dogs. Not to mention, very entertaining. One of the trademark AB moves is the "helicopter." They leap into the air while spinning. Squish does it all the time. He also does what we call "The Bucking Bronco" dance. That one speaks for itself. He "talks" to me when he wants to play or go out. And he's such a cuddler. I call him my teddy bear. 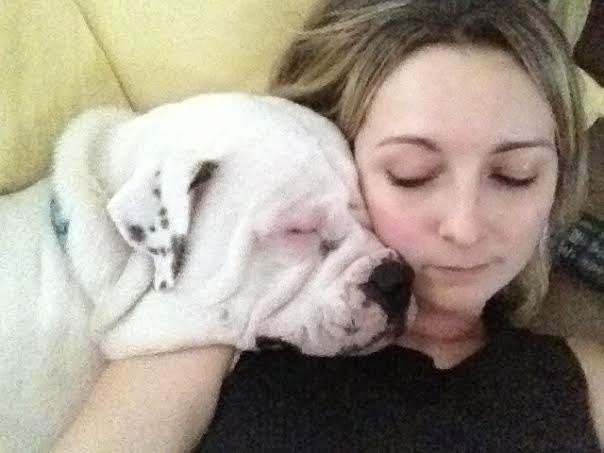 American Bulldogs are strong and powerful, so if you are considering adopting one (rescue if you can!) please do your research and make sure they are a good match for your personality and lifestyle.
If you'd like to be friends with Squishy, he has his own FB page. Stop by and say hello. https://www.facebook.com/SquishyVonValentine

You can watch Squishy having fun in this vidio:

So let's look at the different aspects of Squishy's breeds.

First for his American bulldog ancestry, check out the video below.