This day in history, January 11 first recorded lottery in England 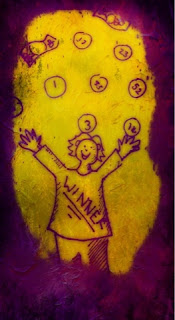 As writers, we can draw ideas from all aspects of life, be it everyday goings on, news reports, our own experiences, dreams or even History.

Because of this, once a month, I'll be challenging myself to learn something new, based on something that happened within that month, in history.

This month, I've chosen the 11 January and the first lottery held in England.

The lottery was held in 1569 by Queen Elizabeth the first, as a way of raising money for public works, imparticular the repair and improvement of England's harbours.

To tempt people to take part Elizabeth offered up a prize of £5000, which was an astonishing amount of money at that time; however, this amount was to be made up by a combination of ready money, tapestries and linen cloth.

The lottery was open to 40,000 participants. All of whom would have to pay 10 shillings for the chance to win the grand prize. This wasn't a lottery for everyone, 10 shillings, was a very large sum of money, in those days, more than the average man could afford. Which meant that the first lottery was a game for the wealthy.

Now for the surprising part. As further motivation, all entrants received a weeklong immunity from arrest for all crimes other than murder, felonies, piracy or treason.

Imagine the stories we could create around an incentive like this. :)

So, who eventually won this first Lottery? Sadly no one actually knows, it seems that the record of the eventual winner was sadly lost, but you can't help but wonder if, in reality, there was more than one, when you consider how many of the entrants would have used that week long immunity, for their own financial gain.

Over the years, there have been many different lotteries held in the UK. The national lottery today, is still used to fund government projects, among other things.

The sad reality is that the majority of those who play will never win big, but for those who do it can be life-changing. New homes, new cars, new businesses, the world's the limit as to what you spend your winnings on.

Some of the more unusual choices include:

- A pair of new hips 'for the wife'
- Tarantulas
- A firework company
- next door's house, before turning it into a pub.

That last one could be fun if you've lived next to the neighbours from hell, for a fair few years.

Naturally, not everyone likes to advertise their win and who can blame them, as many winners who've actually chosen to go public have quickly found themselves hounded by begging letters not only from complete strangers but by friends and family alike. As well as having their purchases scrutinised and slammed by both the media and the public. As a result, 85% of all lottery winners choose to remain anonymous.

On top of all this, having all your numbers come up, doesn't necessarily guarantee you the big windfall you might expect.

Take for example a draw that took place on the 14th of November 1995. The prize was a whopping £16 million, if of cause there was only 1 winner, but this particular draw there was not just 1 winner, but an amazing 133 winners with which to divide the winnings.

Can you imagine that? Sitting there in your living room, watching those balls fall into play, heart in your throat, as one after another, they hit home. The excitement, the joy, the sudden belief that you are about to walk away with a massive 16 million Jackpot. You're celebrating, overjoyed, certain your life is about to change forever. You contact the powers that be, your ticket is checked, you wait wait with baited breath for them to confirm your win. Only to discover that you are not alone. That the 16 million is to be shared, not with just 1 person, nor 2, but 133 others.

That millionaire making number quickly diminishes before your eyes until you are told that in actual fact, you'll be walking away with just £120,000. Okay, so it's still nothing to be sniffed at, but it's no longer the life changing win you'd imagined when your numbers first fell into place.

The lottery from it's early beginnings to modern day, is a great source for ideas.

What ideas can you take away with you for future use, in a short story, novelette or full-length manuscript? What would you do if you were given a weeklong immunity from arrest for all crimes bar those mentioned above? Perhaps you could use your winnings as a way of getting revenge on a difficult neighbour, if so how?

Why not play around with what-if scenarios and see how many great story ideas you can create based on the lottery.

I'd love to hear your thoughts, so be sure to leave a comment below.