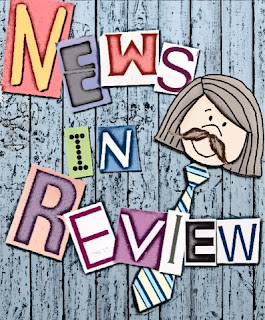 It's time for my weekly take on the news.

Each Monday I'll give you my take on the news that caught my attention in the past week, as well as asking your thoughts.

First this week, new laws on e-cigarettes to be introduced across EU.

As a current smoker of regular roll-ups and someone who has used e-cigarettes in the past, this news report really caught my attention.

I used e-cigarettes late in 2014 and was successful in quitting smoking at least for a while.

I used nicotine free e-juices and could have stayed smoke-free if I'd been stronger and handled my life stresses a little better, but hey, no one's perfect,

I found the e-cigs very beneficial in helping me to quit. They gave me something to hold and the sense that I was smoking, which really did help. That said, I found them very harsh on my throat and developed a cough that took a few months to shift once I was done with them, which left me wondering how safe e-cigs really are and if perhaps not all the claims made about them were true. Especially as hubby experienced much the same with his own throat and chest, while using e-cigs.

The reality is that there was very little in the way of testing done before these products were put on the market and on top of that, cheap vaporizers were and still are being sold all over the place, along with cheap juices.

Like most people, I have no idea what is in any of it, but I was aware that it was seriously messing with my lungs and chest, far more noticeably and quickly than normal cigarettes ever had.

Now, we all know that  regular cigarettes are dangerous to our health, but can we be sure that e-cigs are any better? I know I'm not. Which, is why  I was pleased to see that they plan to bring out new laws and regulations regarding e-cigs. And when you consider that they have already been banned in some parts of the EU, it makes you question why this didn't happen sooner.

Now at present, there doesn't seem to be too much information about these new laws or how they will affect users, beyond the fact that they will now be health warnings connected to them and controls on how they are used.

Although they have been dubbed as a helpful way to quit smoking, many who start using e-cigs never stop. Instead, turning their addiction from real tobacco to these and continuing to smoke them for years on end.

Others, who were previously non-smokers jumped on the e-cig trend and turned it into a full-blown hobby, in which they collected many different flavours of juices, as well as the different brands of  vapouriser.

A whole waves of websites, forums and YouTube channels have popped up that are dedicated to the e-cigarettes trend and I can't help but wonder if this is cigarette history repeating itself all over again, because didn't we once foolishly believe that  regular cigarettes were also safe.

Adverts for cigarettes once contained doctors and dentists proclaiming their favourite brands. Some adds even had babies scrawled across them, something we wouldn't dream of today.

Although ads for e-cigs have not been quite so prominent in the UK, they are still out there and in the early days of e-cigs many doctors were advocating them as a great way to quit smoking, a story that now seems to have changed.

Personally, I think the safest option when it comes to your body, is not to smoke at all, be it e-cigs or regular tobacco. To me, e-cigs just seem like a convenient way to keep pumping smoke and nicotine into our systems with little care for the effects, and as such, I think stricter regulations do need to be in place, especially as many, believing they are safe, smoke e-cigarettes around their children.

So, what are your thoughts? Do you think it's all just a big overreaction or like me, do you think we need to know more?

I'd love to hear your opinion, so please leave a comment below.

This next piece of news has me boiling, it involves the celebrity Boy George being appointed a judge on BBC's programme the voice. A role that will see him mentoring young people.

Now in and of itself it all seems harmless enough until we remember that just a couple of years ago, Boy George served a disgustingly short 4-month sentence in prison, after handcuffing Audun Carlsen to a wall and beating him with a metal chain, all because Audun refused his sexual advances. Is this really a man who should be mentoring young people?

What's more, the BBC only recently fired Jeremy Clarkson for what can only be described as a far more trivial offence, in which he hit out at a producer on the popular show top gear.

Why do we continue to support and in some cases worship people who commit horrific crimes, simply because they are famous?

In my opinion, Boy George should have faced a much greater sentence and had his career destroyed for life, due to his actions. He certainly should not be working with young people, as a musical mentor.

What happens if one of these young people attempts to say "No!" to a sexual advance from Boy George? What makes this even worse, to my mind, is that Boy George never attempted to apologise to Audun for the brutal attack nor showed any remorse for his actions.

I just cannot believe this is being allowed to happen and think it says a lot about today's society, but what do you think? Leave your thoughts in the comments below.

This next news report really freaked me out, mainly because it affects the county I was born in and where a large number of my family still lives,  Kent.

By all accounts, there is a doomed warship hidden beneath the water, in the Thames estuary off sheerness in Kent, that has enough bombs on board to wipe  Kent off the map entirely and it's been there since 1944 when it sank.

The American ship known as The SS Richard Montgomery, and now dubbed the doomsday boat, is packed with so many bombs that it could, in fact, trigger the biggest non-nuclear blast ever, has now, by all accounts, become a terrorist threat.

What gets me with this news report is that surely by putting it in the paper they are in fact advertising that it is there to the very terrorists they are worried might use it as a weapon, in the perfect case of "if they didn't know before, they do now!" Great work British media.

I've never heard of this ship before, so I'm going to assume that there was a good possibility that terrorist wouldn't either, but you have to love how The Sun, whilst claiming a fear that terrorist will not only discover the ship and its deadly cargo but use it for a terrorist attack then go and openly advertise it's existence.

It's a huge concern for me too, as the majority of my family still resides in Kent. All I can say on this one is that I seriously hope Terrorists are as dumb as the British media.

So are the newspapers just scaremongering, trying to make new's happen or just out and out dumb? Let me know your thoughts below.

Well, that's it from me for this week's in the news. There were lots of stories that grabbed my attention, far too many for me to write about them all, but if you've spotted some news that you think's worthy of discussion, feel free to leave your thoughts in the comments below.